As a long time Internet recruiting veteran and Internet job board pioneer, I’m always interested, and more often, then not, amazed at many of the mergers and acquisitions within the HR technology and Internet Recruiting market.

Many of the Venture Capital funded companies never get off the ground, because they never had a business plan or technology that had much hope of really working (think BranchOut, Jobster, or any and all “automated psychological profile job matching algorithm companies”).

Recently, Glassdoor raised an additional $50 Million, bringing their total investment to over $90 Million. I don’t know the recent valuation for Glassdoor, but if the investors wanted a 10X return, Glassdoor would have to sell for well over $900 Million (a little under the current public valuation of Monster.com and DICE.com, combined).

So, seeing two of the best brands merge, who can provide synergies to each other in a real-profitable way, is always exciting.

Congratulations to Don Firth, of Jobsinlogistics.com, and Sue and Gregg Booth of Net-temps!

What are your thoughts about the acquisition?

The purchase was for $50 million in cash, based on trailing 12 months revenues of approximately $38 million.

The question will remain, can DICE extend the brands and increase revenue across the brands, like they have done with Rigzone, or are they going to leave the brands in autonomy, like the recent acquisition of ITJobBoard in Europe.

DICE has a lot on it’s plate right now. Integrating Open Web, it’s social sourcing tool, it purchase 12 months ago, into the Dice.com search engine, and extending that beyond to other brands.

The Hcareers acquisition will put Dice into the hospitality segment, where it has never competed previously. The HealthECareers seems to be redundant based on their acquisition of AllHealthCareJobs a couple of years back. 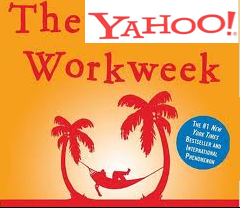 From my personal experience, Yahoo has been living the “4 hour work week” with a culture of non-accountability.
Several years ago, I was working on a job advertising partnership with Yahoo.
No one on the Yahoo team would make a decision.
No one was ever “available” to make a decision.
Then, someone would come back to the table and say, OK, we have approval.
We would draft the documents and send them to their legal team.

The document was only 5 pages, mostly boilerplate stuff, but it would take several more weeks. I later learned that the “legal department” was actually outsourced to a big firm, and since their was no accountability on the part of the entire Yahoo team, the legal team just kept billing, billing, and billing.

Of course, the document that we sent to get reviewed was returned with notes saying that Yahoo could not agree to those terms, and so we would do it again.

After three attempts at working through this complete incompetence, I finally got the Yahoo “authority” on the phone, and told them to find someone else’s time to waste. (The actual text was more like “go blank yourselves and get a real job”.)

So, after hearing the news that Marrissa was going to put an end to the “4 Hour Work Week” culture at Yahoo, I knew exactly what she going after… the lack of accountability.

Good for Marrissa! Good for Yahoo!

Flexible time for employees is a great benefit. Many responsible employees can, and do work better remotely. However, Yahoo is in a position where they need all-hands-on-deck. They need a culture change.

The employees who are committed to turning Yahoo around will stay and weather the culture change that has to happen. The rest… well they’ll be posting their resume on Monster. (Does Monster even exist anymore? Oh.. that’s another story.)

A couple of days ago, after severely injuring my low back while training for Ironman Canada (coming up in 3 weeks), I was referred to Chiro-Medical, a top notch Athletes Chiropractor and Medical office in San Francisco. (which I highly recommend… my Chiropractor was Daniel Lord, D.C).

With my head in my hands, dealing with the lower back pain, I slowly looked up an saw the following painting and quote on the wall.

Here’s the text from the quote.
Real inspiration. Especially as the date of my first Ironman triathlon looms closer.

It used to bother you when they said, ‚ÄúIRONMAN, oh yea, that‚Äôs really cool. My friend does those all the time. She does like 8 or 10 of them a year, but mostly just local ones though!‚Äù

That‚Äôs when you realize that They Don‚Äôt Know and it‚Äôs not important that they do know. It‚Äôs only important that you know. IRONMAN is personal, very personal. IRONMAN is everything for that day. There is nothing more important than crossing that line; and you will cross the line, no matter what. Quitting is not an option. IRONMAN defines you and in many cases it redefines you.

IRONMAN is your commitment, dedication, preparation, determination and perseverance to train for an event that in the beginning seems impossible to finish.

IRONMAN is pain, agony and the almost reckless passion of pushing yourself beyond the limits of what you are capable of.

IRONMAN shows you that boundaries are made to be broken. All of this to compete against your own best effort for that day.

At the end of that day, everyone at the finish line knows, and you know that for this day‚Ä¶ and forever‚Ä¶ YOU ARE AN IRONMAN!”

The poster and quote above are for sale, with proceeds benefiting Racers Against Childhood Cancers. To purchase a print, or support RACC, click here